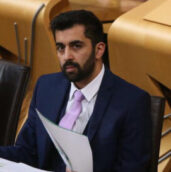 MUCH has been written by legal experts and others about the vagueness within the Hate Crime and Public Order (Scotland) Bill. Vagueness in law is certainly dangerous. If the state is going to use power against you legitimately, it must be possible to know what counts as the infringement of law for which you are being punished, but, to put it simply, vagueness makes it impossible to know this.

The Hate Crime and Public Order (Scotland) Bill is “about offences relating to stirring up hatred against a group of persons”.  To be held guilty of behaviour that, in some way that is undefined, ‘stirs up’ an emotion is not simply vague, it is conceptually incoherent. The phrase “stirring up” is a metaphor. Metaphors are very powerful for rhetoric, but extremely bad for giving instructions or making rules.

People can understand what the metaphor is based upon: to stir means moving the substance in a circular motion, as you do when you stir a cup of tea or stir the porridge. ‘Stirring up’ means moving the physical substance in such a way that the bottom of the substance is moved towards the top. If you take, for example, a pot of soup: you might want to stir up the soup so that the lentils that have sunk to the bottom of the pot are distributed throughout the pot.

So how does this metaphor work for “stirring up hatred”?  It appears to mean that you do something to move the hatred at the bottom of the metaphorical pot so that it is distributed throughout the metaphorical pot. (I know – it hardly makes any sense).

The first thing to notice, I would suggest, is that:  like the lentils in the soup, for it to be possible for hatred to be stirred up in the first place, there has to be something there to stir, in this case the hatred must already be there. The Bill makes no suggestion as to where the hatred that you are ‘stirring up’ actually is, but you cannot be stirring up something that does not exist, so it is somewhere.

Second noteworthy aspect is that the hatred you are criminally stirring up is not your hatred; wherever it is, the hatred is someone else’s hatred! So according to this new law you are going to be charged with a crime because of someone else’s emotions!

According to this Bill we have a ludicrous situation in which some person or people have the hatred already, whilst you, who don’t have the hatred yourself, will be the criminal because of their pre-existing hatred.

But the Bill is even more ridiculous than that. At this time of writing Justice Secretary Humza Yousaf has given oral undertakings that he will change the Bill so that:

So you don’t even have to have done any actual ‘stirring up’ of anything to be guilty of a crime.  All you need is an intention to ‘stir up’ someone else’s hatred!

You could be guilty of a crime even when hatred is not in fact stirred up at all! So what exactly are you guilty of here, when you didn’t do any ‘stirring up’ and you didn’t do the ‘hating’?

It seems you may be guilty of a literal thought crime. And how does Humza know what you are thinking? Is he, or are the police or the courts, mind readers?

We enter the realms of science fiction at this point. The police and the courts need to be able to read the emotion of hate within the hearts of the people who have been ‘stirred up’ in the first place, and then they must be mind readers in order to read the intention in the mind of the accused.

The least Scots require of a new invented crime is that is it observable by a third party. Yet there is no way of proving or disproving that a thought was in someone’s mind or that an emotion was in someone’s heart.

Dr Catherine McCall is a Practical Philosopher and the Civil Liberties Spokesperson for Alliance for Unity. Catherine is a prospective candidate for West Scotland in the next Scottish Parliament election, May 2021. She is one of our AFAF Correspondents.

This article is reprinted, by permission, from Think Scotland 19 November 2020