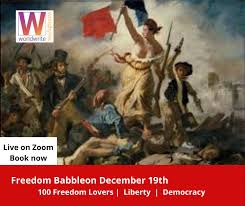 I recently gave a talk at a university on free speech and mentioned Samuel Paty. No one had heard of him. I have also asked numerous academics and others about Samuel Paty. They do not know his name.

In these few minutes I hope to end 2020 by reminding everyone of his name – Samuel Paty – and why it must be remembered.

Samuel Paty was a 47-year-old teacher of history and geography who was stabbed, and then decapitated in a public street close to his school to the north-west of Paris, on 16 October. His attacker was an 18-year-old Islamist of Chechen origin

What had Paty done to provoke such a barbaric act? He had done what he had done for many years. He taught a lesson on the importance of freedom of speech and freedom of thought as part of a civic education course. During the lesson he illustrated the extent of the French nation’s support for freedom of expression by showing the class some of the Charlie Hebdo cartoons of the Prophet Muhammed, but he also said that any Muslim students present could look away or leave the room.

Paty was subject to a campaign of vilification on social media and complaints to the school. A fatwa was also declared on Paty by an Islamist group.

Condemnations of the killing and defences of free speech and Enlightenment values were made by many, including trade unions, in France – and, indeed, around the world. Exactly 2 months ago today on 19 October, thousands attended demonstrations across France to remember Paty. The hashtags #JesuisSamuel and #Jesuisenseignant trended on social media as did #JesuisCharlie after the murder of the Charlie Hebdo cartoonists and writers in January 2015. Paty’s murder took place as 14 alleged accomplices in the Charlie Hebdo murder were on trial in Paris.

From the educational trade unions in the UK the response to the murder of a fellow teacher was a deafening silence. The Association of School and College Leaders, the Educational Institute of Scotland, the National Association of Head Teachers, the National Association of Schoolmasters/Union of Women Teachers, and the University and College Union said nothing, despite appeals for them to condemn the murder and defend free speech. (The full list of shame is on the AFAF website)

No university VC made any comment about the murder.

How do you explain this silence? It can only be explained by the fear of being seen to be offensive to Muslims and being denounced as ‘Islamophobic’. As Kenan Malik, and others, have argued, since Ayatollah Khomeini issued the fatwa against Salmon Rushdie on Valentine’s Day 1989, for writing The Satanic Verses, Western culture has ‘internalised the fatwa’.

The internalisation of the fatwa means that all Muslims are seen victims who are easily and constantly offended and, in a gross caricature, as potential Islamists who would support the beheading of a man for defending free speech.

The internalisation of the fatwa is expressed in the rival hashtag #JeNeSuispasSamuel as it was after the Charlie Hebdo murders with the hashtag #JenesuispasCharlie. It is the belief that you can defend free speech but not Charlie Hebdo.  Free speech BUT…never offend, never blaspheme. BUT that’s not free speech. Free speech is an absolute.

The silence about the murder of Samuel Paty from those organisations representing educationalists in the UK is disgraceful. Not merely because of their fear or cowardice, but because their members are responsible – as was Samuel Paty – for education of future generations and they do not see that education is worthless without freedom of speech.