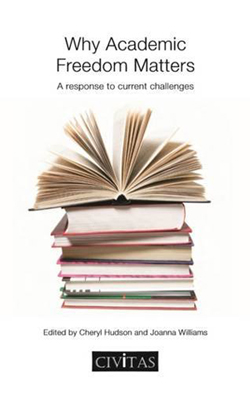 A ‘must read’ new book out this September from Civitas with contributions from many AFAF supporters including Jenny Jarvie, Dennis Hayes, Cheryl Hudson (ed.), Tara McCormack, Jason Walsh and Joanna Williams (ed.). Order it now on Amazon only £9.

“Academic freedom in British universities has become a national talking point. Government policies such as the Prevent Duty and the Research Excellence Framework pose a threat to academic freedom, as do students – and increasingly scholars themselves – who want to turn the campus into an intellectual ‘safe space’. Yet despite the seemingly novel nature of current preoccupations, debates over academic freedom have a long history. This book explores why, for centuries, scholars have considered intellectual autonomy essential for the pursuit of truth and the advancement of knowledge. Contributors to Why Academic Freedom Matters come from a variety of institutions, disciplines and career stages. Together, they consider the key threats to academic freedom today that emanate from national government policies, institutional practices, student-led groups and the desire from scholars themselves not to upset either students or colleagues. Each chapter offers a different perspective on the continued importance of academic freedom within a changing university. The volume as a whole provides a timely discourse on the connection between free enquiry and academia’s historic mission to advance the sum of human knowledge. In making the case for free, open and robust debate, this book points to the many ways in which academic freedom is being eroded and why this still matters for scholars, students and the future of higher education”.